This Candidate Does Not Exist

A story about impersonation, election integrity and being in the media

In my high school history class, we learned about election integrity and how phishing campaigns and social media bots affected the US election in 2016. This got me thinking, could something like this happen again in 2020?

In December, Twitter changed its policy on verifying candidates. Previously, congressional and gubernatorial candidates needed to win their party's primary before their Twitter accounts could get verified. Now, any candidate running in a primary could have their account verified. Just like during the midterm elections in 2018, Twitter would also be partnering with Ballotpedia, a non-profit political encyclopedia, to identify candidates to verify.

I wanted to test if Ballotpedia and Twitter would verify a completely non-existent candidate. I remember telling my sister about my idea, and we both laughed. I had the idea in the back of my mind for a while and finally asked myself, “Why don't I just do it?” It was the middle of Christmas break, my girlfriend was out of town and I was kind of bored. I made a website and Twitter account for a fake candidate, named “Andrew Walz,” running in Rhode Island's 1st Congressional District. The site took me around 20 minutes to make with a website builder and boilerplate copy. 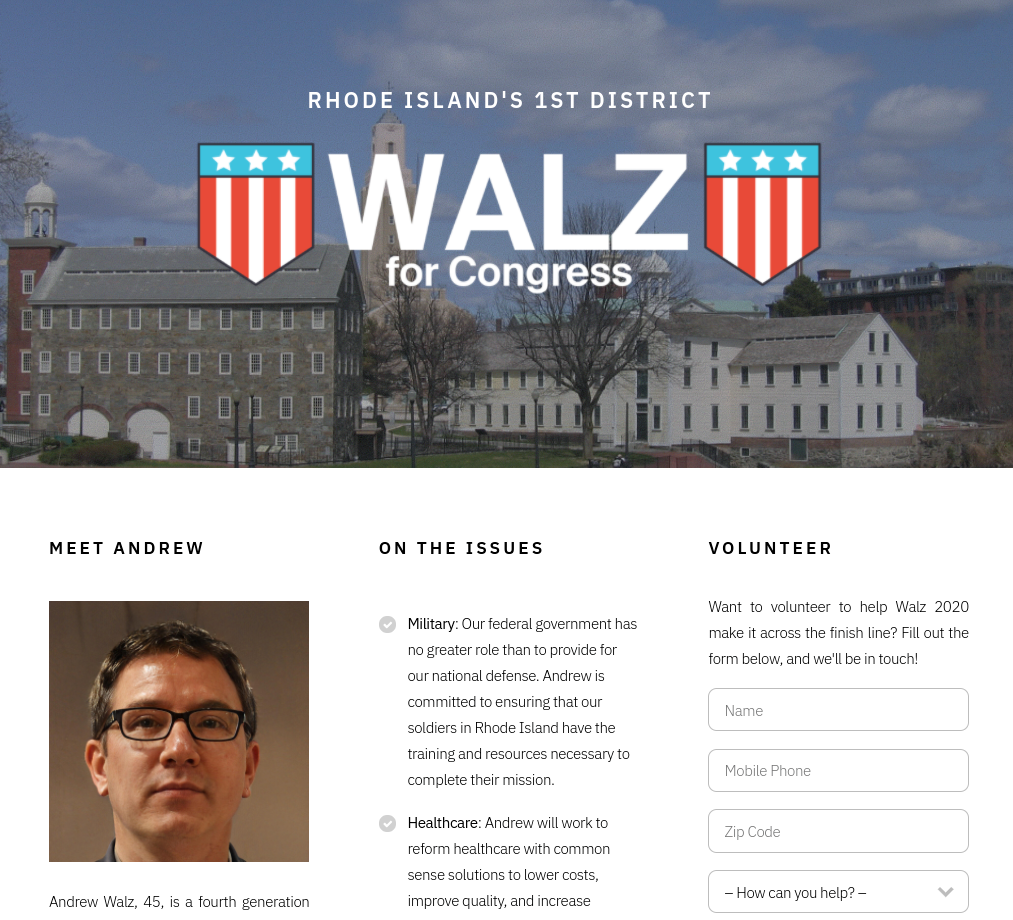 The candidate's profile picture was generated with thispersondoesnotexist.com, a website that produces images of non-existent people using artificial intelligence.

I submitted the fake candidate's information to Ballotpedia, and within a week (around January 1st), the information was on their website, and Andrew Walz had his own entry. 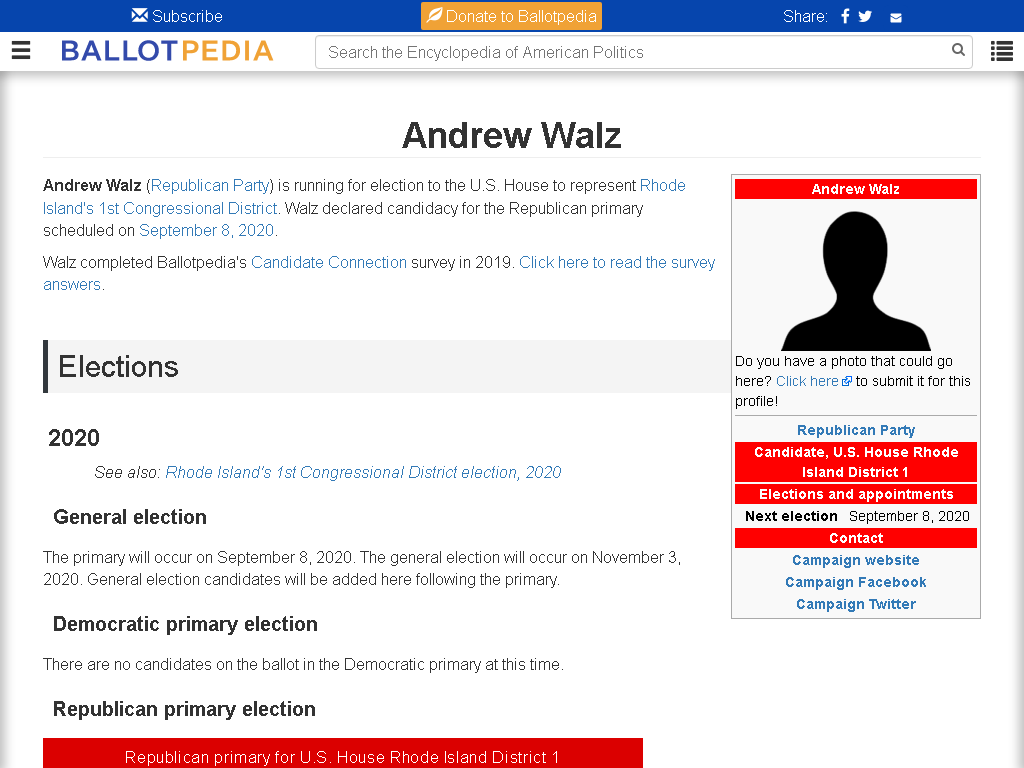 On February 7, Twitter sent an email saying they were going to verify the account, but needed it to have a header photo first. 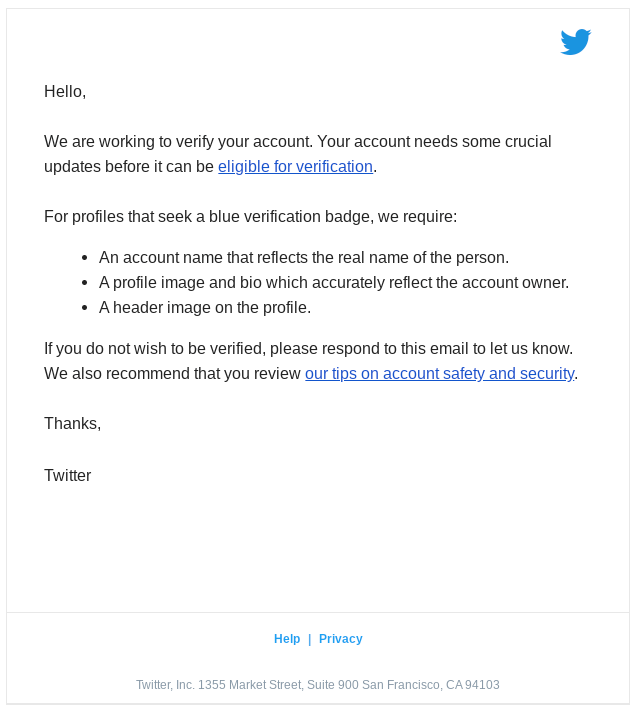 This was simple enough to do, so I added a header photo and sent a reply saying what I had done. 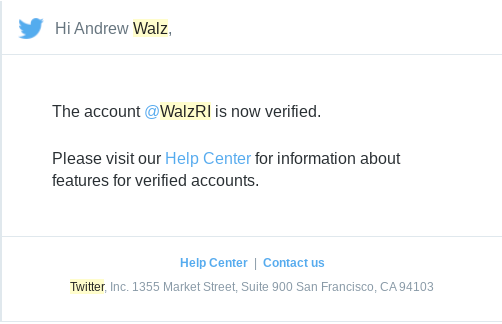 First off, I was surprised that Twitter was proactive in reaching out to Andrew Walz. I didn't do anything to get their attention. Second, I was concerned because Twitter never asked for documents to prove Andrew Walz's identity, such as a government-issued ID. Because this candidate is fake, I never filed anything with the Federal Election Commission to register to get on the ballot. Twitter or Ballotpedia could have checked public FEC records to see whether this candidate was official (it is illegal to file false information with the FEC). This fake candidate also never received any press or mentions in media outlets, which should be an additional red flag. 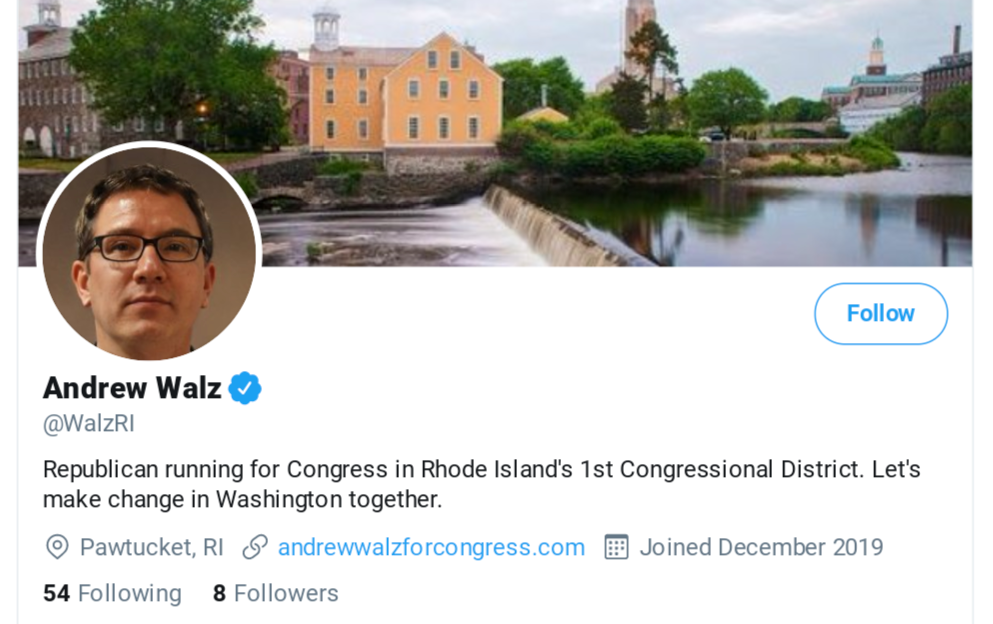 If I could do this with little time and money, imagine what a highly-skilled team of people looking to do actual damage could do. Knowing full-well that I shouldn't have been able to do this, I decided to reach out to reporters. Why didn't I go directly to Twitter or Ballotpedia? They likely wouldn't have done enough to fix this in the long-term. I think that they would have suspended the account and moved along. With the story being out there in the open, I hoped that both organizations would be forced to do something to prevent this from happening again.

I reached out to CNN's Donie O'Sullivan, who interviewed me about the incident at my high school in mid-February. It went smoothly, and I'm thankful for the crew's attention to detail. 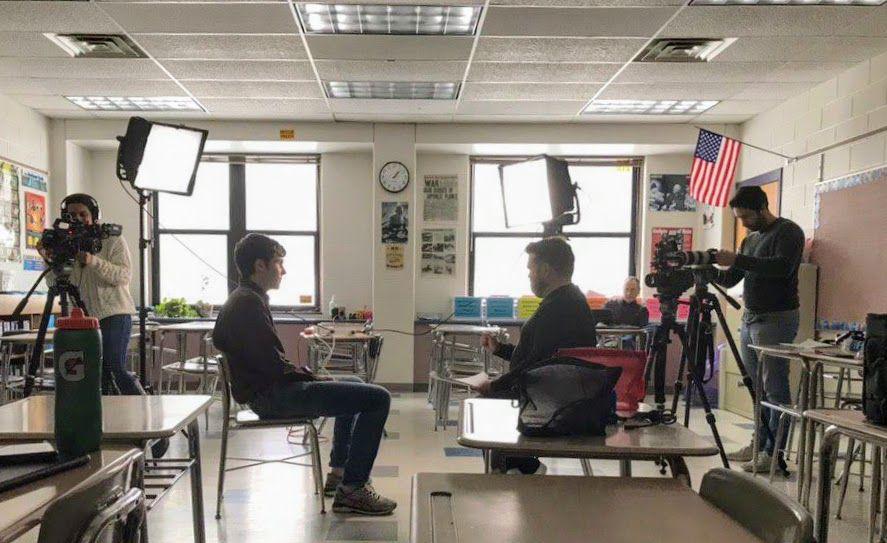 CNN published the story on February 28. My name was withheld because my family wasn't sure what the response to the story would be. I didn't want my college applications to be negatively affected. Almost all of the reactions about the story were positive, though.

Twitter suspended the account but didn't say much in their statements to news outlets about what happened.

On the other hand, Ballotpedia had a very transparent response and outlined everything that happened on their end and what policies they were changing in a page titled Legitimacy of Andrew Walz 2020 election candidacy and Ballotpedia profile. They updated their definition of a candidate to have a FEC ID number before they are included in Ballotpedia's database of candidates. Ballotpedia's CEO later published a statement and overview of the events that happened in an article called The Andrew Walz hoax candidacy. I admire their response and how they handled this situation. If more companies and organizations responded to controversy transparently like this, the world would be a better place.

Seeing the response from other media outlets and social media was a fascinating experience. Other outlets, like the New York Post, Insider, and Engadget covered the story. Barstool Sports called me a “random ass teenager,” a Canadian news show for kids talked about it, a podcast called me a “well-to-do internet troll,” and a research paper from Google Brain and the University of California, Berkeley called it a “fairly innocuous prank.”

This was a big lesson in ethics and the media for me. While I was debating whether to come forward, I didn't want to regret my decision later. Ultimately, I'm happy with what happened and am glad that some change came from it.