Now that I'm living on my own, I'm doing a lot more grocery shopping. Every time I walk into a store, I think to myself, “wow, I can literally buy whatever I want.” I can get many varieties of food originating from all over the world for not much money (except if you're at a Whole Foods, I've discovered). If I want to buy 100 potatoes and be like one of those people described in middle school math problems, I can.

Boris Yeltsin, newly elected leader of the Soviet Union, visited the Johnson Space Center in 1989. Afterwards, he made an unplanned stop at a Randall's grocery store in Clear Lake, Texas. He was in awe of the amount and variety of food anyone could buy. He didn't even get this much food as the Soviet head.

In Yeltsin’s own autobiography, he wrote about the experience at Randall’s, which shattered his view of communism, according to pundits. Two years later, he left the Communist Party and began making reforms to turn the economic tide in Russia. You can blame those frozen Jell-O Pudding pops. 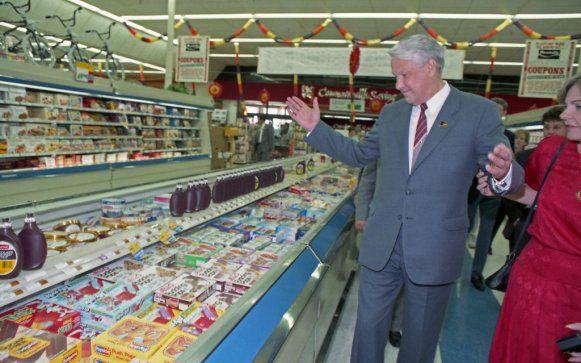 “When I saw those shelves crammed with hundreds, thousands of cans, cartons and goods of every possible sort, for the first time I felt quite frankly sick with despair for the Soviet people,” Yeltsin wrote. “That such a potentially super-rich country as ours has been brought to a state of such poverty! It is terrible to think of it.”

It's crazy to think that a quick visit to a grocery store in Texas contributed to the defeat of communism.